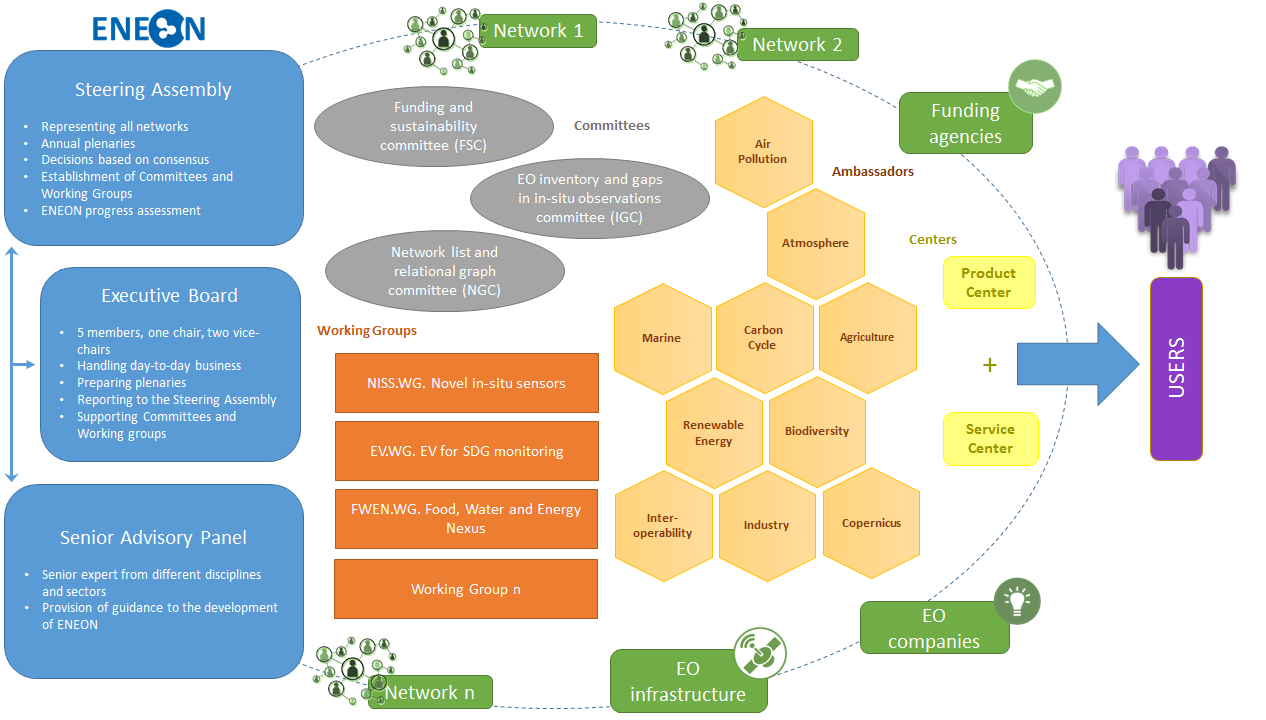 - Decisions based on consensus

- Establishment of Committees and Working Groups

- Reporting to the Steering Assembly

- Provision of guidance to the development of ENEON

A small number of committees will be established on a permanent basis, and these committees engage core activities of ENEON. Committees conceived as permanent act as the point of contact to other organizations and networks such as the European commission, GEOSS and Copernicus and work for a continuous improvement of the network of networks.

Its mission is to look for future finance of the ENEON and the connection to policy. Its initial action will be to explore how to get the figure of ERIC, prepare a COST action and ensure connection to the ERA-Planet. Lead by CREAF.

Its mission is to create and maintain a relational graph with all the known networks and their interrelations being in the European scope. The network graph can be extended to other regions in the GD-06 task of the GEO workplan. Lead by CREAF.

Its mission is to create and maintain a list of gaps in EO reported by the networks that can be cover in future projects or activities. Lead by TIWAH.

Working Groups will be established for a limited time as needed. It is foreseen that Membership in Working Groups primarily will be drawn from ENEON members but can also include other experts as needed. Working groups are internal activities that are oriented to improve internal communication and looking for a common understanding. They are oriented to achieve more focused goals, such as a best practice documents or cross-domain problems assessment.

Its mission is to look for a short list of novel in-situ sensors that can be integrated into EO systems and cover gaps in EO. It also can include citizen observatories. It will conclude its activities in March 2017.

Its mission is to disseminate the knowledge that has been created in ConnectinGEO buy publishing one scientific paper in an high impact factor publication. It will conclude its activities in March 2017 with a manuscript of the paper submitted.

This WG focuses on a Food, Water and Energy Nexus Challenge (coming from the Task 5.6 in the ConnectinGEO Project), which aims to assess the added value of ENEON in addressing this complex cross-domain issue from a nexus point of view.

A single person (or a very short team) that acts as the point of contact between the ENEON and a theme or a domain specific collective. They have the mission to reach its community and to spread the ENEON existence and benefits. A second objective is to contribute to the work in IGC and the NGC by reviewing it and adding content to it.

Working Groups will be established for a limited time as needed. It is foreseen that Membership in Working Groups primarily will be drawn from ENEON members but can also include other experts as needed. Working groups are internal activities that are oriented to improve internal communication and looking for a common understanding. They are oriented to achieve more focused goals, such as a best practice documents or cross-domain problems assessment.

More information: D7.4 Strategic view for the sustainability of ENEON after the end of the project (pdf, 894 kb)

The overarching goal of ERA-PLANET is to strengthen the European Research Area in the domain of Earth Observation in coherence with the European participation to Group on Earth Observation (GEO) and Copernicus. The expected impact is to strengthen the European leadership within the forthcoming GEO 2015-2025 Work Plan. ERA-PLANET will reinforce the interface with user communities, whose needs the Global Earth Observation System of Systems (GEOSS) intends to address. It will provide more accurate, comprehensive and authoritative information to policy and decision-makers in key societal benefit areas, such as Smart cities and Resilient societies; Resource efficiency and Environmental management; Global changes and Environmental treaties; Polar areas and Natural resources. ERA-PLANET will provide advanced decision support tools and technologies aimed to better monitor our global environment and share the information and knowledge in different domain of Earth Observation.

ENEON will be part of ERA-Planet Strand 2, which aims to fully exploit data and information, tools and services that derive from the increasing multi-sensor, multi-temporal and multi-scale capacity and use of EO (in situ and space-borne), in conjunction with other cross cutting observational platforms, towards a nexus approach, to evaluate, predict and monitor the resources, and promote cross-sectorial approaches to reconcile resource efficiency and environmental management insuring the human development according to the sustainable development goals

ENEON is co-leader of the GEOSS In-Situ Earth Observation Resources Foundational Task, which analyzes the current state, trends, needs, and assess gaps (geographical coverage, temporal and spatial resolution, etc.) for in-situ observing systems and networks, as they constitute a key element of GEO/GEOSS. The task puts particular focus on coordination and access to data and will provide various coordination opportunities in order to sustain and strengthen existing and planned ones, to advocate for new systems, and to encourage integration and linkages to meet user requirements which will be strongly linked with the GEO User Needs and Gaps Foundational Task and build on other on-going requirements processes outside of GEO.